During the coronavirusa pandemic, the number of people screening themselves for anxiety or depression has skyrocketed.

This past June, daily screenings were up more than 400% compared to January, according to a report from the nonprofit Mental Health America.

A note to readers and listeners – this story discusses suicide. If you need help, please call the National Suicide Prevention Lifeline at 1-800-273-8255 or reach out to the Crisis Text Line by texting HELLO to 741741.

The group offers anonymous online tests which look for symptoms of various mental illnesses, and they’ve become a crucial resource for people seeking help. In May and June, about 7,000 people completed mental health screenings each day.

"The problems are concentrated a lot among younger people," said Paul Gionfriddo, president and CEO of Mental Health America, "and we've also seen increasing numbers and increasing severity of results around other conditions that people would think would not necessarily be related to the pandemic, like psychosis."

Because the screenings are self-directed, the research doesn't represent a random sampling of Americans. Gionfriddo said the people who take these tests are more likely to seek help for symptoms of mental illness.

"The screening is free though, and it's anonymous, so most anybody who finds it can take it," he said. "There are no real barriers or obstacles."

That uptick in depression and anxiety is reflected in other emerging research. This past April, the U.S. Census Bureau debuted a new tool called the Household Pulse Survey, which looks at the frequency of mental illness symptoms over the past seven days. The latest reporting shows the number of Americans facing symptoms of anxiety or depressive disorder continues to trend up.

Gionfriddo said a majority of people screening positive for these conditions cite loneliness as a key factor shaping their mental health. Even before the pandemic though, loneliness was widespread.

"What we've seen happen in the pandemic is an acceleration of the numbers of people who are saying loneliness in a factor," he said, "and now we're also seeing growth in current events, COVID-19 in particular, and grieving, and we think soon financial problems will also show up more on that list."

More people are also reporting thoughts of suicide. This past June, more than 25,000 people who took Mental Health America's depression screening said they frequently think about suicide or self-harm. That number is up about sixfold from January.

Gionfriddo said this is an early warning sign, and interventions are possible.

"It's going to take money and resources for services... when people are first beginning to feel the impacts of what will become diagnosed as serious mental health conditions," he said. "We've got to be paying attention to that and recognizing there are a lot more people in stage one [of a mental illness] right now than we've ever had before, and we need to do something about that."

So much remains unknown about the pandemic's long-term effects on mental health. Researchers are gathering information almost in real time, and some of their findings have been surprising.

A recent study from the American Psychological Association found loneliness did not appear to increase during the pandemic. Researchers surveyed a sample of American adults early this year, before social distancing took effect. They followed up through late April and found no significant change in average levels of loneliness. That may be because more people are connecting with loved ones through phone calls and video chats, said Martina Luchetti, the study's lead author. Still, she said some people, especially those in high-risk groups, may be feeling lonelier on an individual level.

"For us, [it] was actually very surprising that loneliness did not increase, but instead we found that our participants were reporting more emotional, social support from others," Luchetti said.

Syeda Hasan
Syeda Hasan is KUT's development and affordability reporter. She previously worked as a reporter at Houston Public Media covering county government, immigrant and refugee communities, homelessness and the Sandra Bland case. Her work has been heard nationally on public radio shows such as Morning Edition, All Things Considered and Marketplace.
See stories by Syeda Hasan 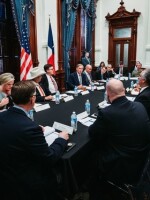