What is the third most spoken language in Austin?

After English, the second most widely spoken language in Austin is, unsurprisingly, Spanish. The third most spoken language is a bit more difficult to determine. The City of Austin says “other Indo-European languages” are the next most common.

But KUT listener Mary Milan wanted to know: What really is the third most spoken language in Austin? So, she reached out to KUT’s ATXplained project.

In this video, listen to Jenny Tinghui Zhang, a Chinese-American and author of the novel Four Treasures of the Sky, and speech pathologist Phuong Lien Palafox share their experiences with the language.

If you found this reporting valuable, please consider making a donation to support it. Your gift pays for everything you find on KUT.org. Thanks for donating today.
Tags
Austin LanguageChineseDemographicsKUTRecommended 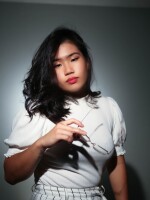 Patricia Lim
Patricia Lim is a photo and video journalist at KUT and KUTX. Got a tip? Email her at plim@kut.org. Follow her on Twitter @limpatricia97.
See stories by Patricia Lim
Latest Stories
Related Content