Freezing in the Texas Heat

Mincheol Kwon is a visiting reporter at KUT. He hails from CBS-Christian Broadcasting System, a South Korean radio station in Seoul. He is also studying audio journalism at the Journalism School of Texas State University at San Marcos.

Planning a summertime trip to Texas? It makes sense to worry about the heat. But you might also give some thought to exactly the opposite.

“I have to live with the cold!” said UT graduate student Taehyun Cho on a recent afternoon.

He’s talking about Texans’ tendency to crank up the AC to near-arctic levels.

"Exposed to the heat [outside] and then suddenly to the cold, my biological rhythm has broken,” said Cho. “Today I was in class shivering."

The extreme fluctuations between indoor and outdoor temperatures may seem normal to many locals, but it strikes people from other cultures not just as strange, but as unhealthy. In Korea, they even have a word for it. It roughly translates as “air conditioning-itis.”

According to Jungkwon Lee, a professor at Samsung Seoul hospital in Seoul if the temperature difference between the inside and outside is above nine degrees Fahrenheit, people start to feel the symptoms of a common cold. That is why many Koreans carry their own sweater or jacket even in the summer.

"If forget my long sleeve shirt, I have to leave class. I even brought some medicine from Korea last month to overcome the chill," said graduate student Hogun Seo.

And if medicine doesn't work, they may take even more drastic measures.

It may seem strange to run an electric heater in the middle of a Texas heat wave, but that’s exactly what Jinyok Kim, also a grad student at UT Austin, decided to do this summer.

"The other day I saw one of my friends bringing her own heater in her office and using that to offset the cold air from the air conditioner,” she said. “So that`s why I‘ve decided to buy one."

Not all the Koreans I spoke with were ready to go that far, but every one of them said the "over-cooling" they've experienced in Texas makes no sense, both from a financial and energy conservation standpoint. After all, a room consumes seven to ten percent more energy to become one degree centigrade cooler.

In South Korea the government regulates indoor temperature in summer. Large commercial and office buildings must maintain a temperature of 79 degrees Fahrenheit or 26 degrees centigrade. You can find the same rule in most European countries, says Atila Novoselac, a professor in the Department of Civil, Architectural and Environmental Engineering at UT.

“Twenty six degrees [centigrade] is [the norm] in Europe, here in the US it’s 24,” he says. “In my opinion it is because of this long culture of air conditioning, and energy being cheap."

Novoselac believes that turning down the AC would not only save money and energy. It could possibly even create a more productive atmosphere in the workplace. 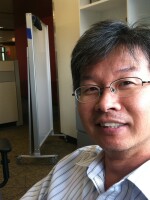 Mincheol Kwon
Mincheol Kwon is a visiting reporter at KUT. He is from CBS, Christian Broadcasting System, a South Korean radio station in Seoul. He is also studying audio journalism at the Journalism School of Texas State University at San Marcos.
See stories by Mincheol Kwon
Latest Stories