The National Weather Service has confirmed that four tornadoes touched down in and around San Antonio Sunday night leaving in their wake damaged houses, downed trees and debris strewn down city streets.

The first tornado to be confirmed was an EF-1 rated tornado that hit north central San Antonio in the area of Highway 281 and the Quarry.

The tornado traveled for about 4.5 miles and winds reached speeds of up to 105 miles per hour. National Weather Service meteorologist Bob Fogerty says survey crews were able to determine it was a tornado by the direction of the damage and debris. 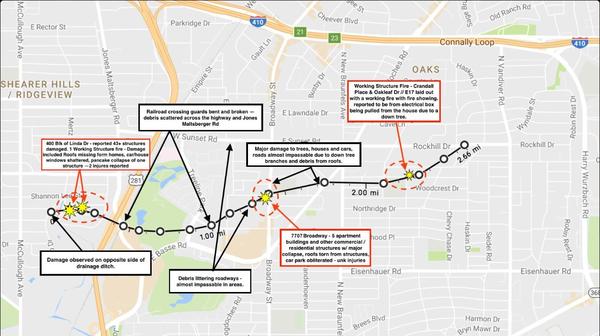 "If it's straight line winds, everything seems to be blown over in one direction. When there's tornadoes - because tornadoes are circulating - we expect to see things thrown around in sort of a random pattern. Sometimes you can even see the circular pattern - that's not necessarily the case but things get to be sort of random instead of all one direction," Fogerty says.

The second tornado confirmed by the weather service was an EF-0-rated twister that was weaker than the first, had a path of 1.6 miles in Windcrest and Converse just east of Interstate 35. Winds reached speeds of up to 70 miles per hour.

The third tornado another EF-1 with 105 mile per hour winds traveled for 1.4 miles near the putting green at the Northern Hills neighborhood near Nacodoches and Thousand Oaks.  More than 150 homes and structures were damaged across San Antonio and​ Bexar County.

The fourth tornado touched down near Garden Ridge, east of Schoenthal Road on the Northeast Side. The weather service reported it was an EF-0 with 85 mile per hour winds and a path of only 0.70 miles.

There were no fatalities but five people suffered minor injuries according to the San Antonio Fire Department and about 10 people had to be rescued from their homes or collapsed structures. About 84,000 CPS Energy customers lost power, but by about noon that number had been reduced to about 14,000. One of the heaviest hit areas included a neighborhood in North Alamo Heights off Linda Drive.

According to the San Antonio Fire Department, firefighters responded to 13 water rescues during the storm event and two fire stations suffered structural damage. Fire Station 40’s bay doors were blown off and station 11’s roof above the dorm was damaged.