Update 11:15 a.m. Monday James Matthew Bradley Jr. has been charged with transporting immigrants illegally and his role in 10 of their deaths.

According to a federal criminal complaint, Bradley was found in the cab of the tractor trailer by San Antonio Police Sunday Morning. He denied knowing the contents of the truck until he heard from sounds coming from it, wherein he says he tried to offer aid. 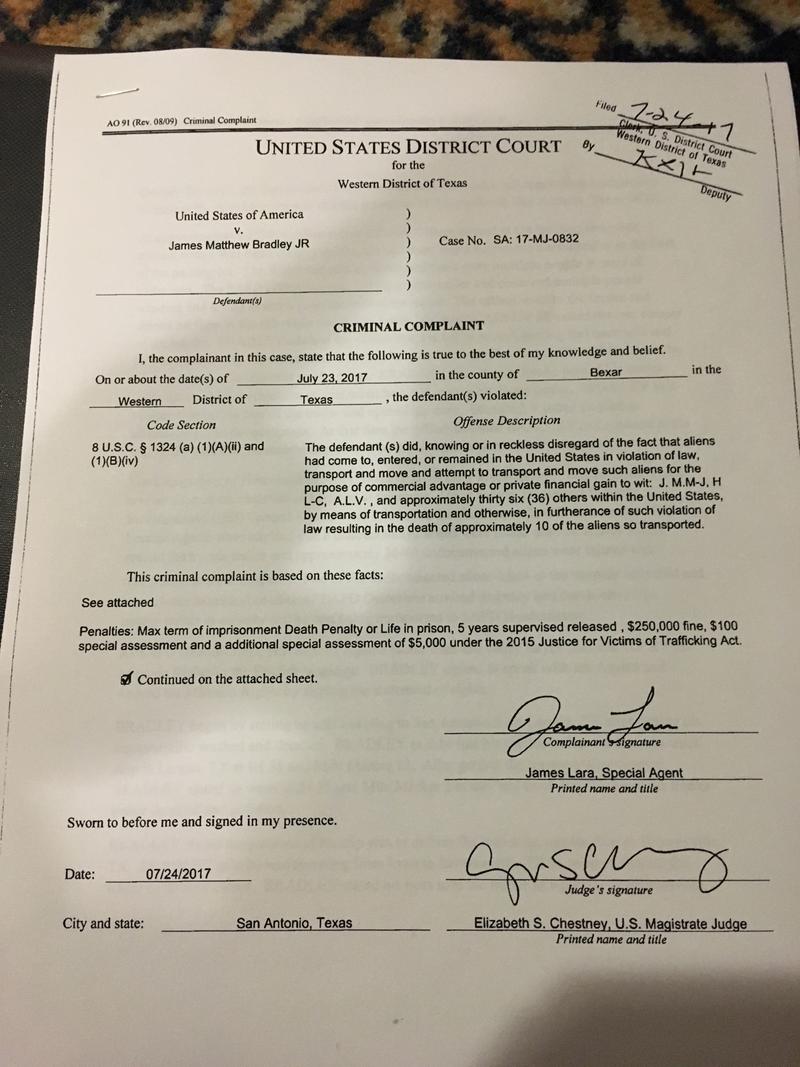 In the complaint, Bradley says he was transporting the trailer from Schaller, Iowa to Brownsville. Bradley said in the complaint he traveled to Laredo to get his truck washed and detailed.

One of the victims stated in the complaint that he and seven of his relatives had been in a "stash house" in Laredo and were being transported to San Antonio.

The same victim says there were 70 people already on the trailer when they were loaded.

Update 10:20 a.m. Monday  Federal authorities say a tenth person has died after being discovered in the back of a sweltering tractor trailer early Sunday Morning. 20 were hospitalized in dire condition.

The owner of the truck – Clearwater, Florida native James Matthew Bradley, Jr. – is expected to be arraigned at 11 a.m. this morning.

Update 5:30 p.m. Sunday This story has been updated throughout to reflect new information from the U.S. Department of Justice.

A previous version and headline said ten were deceased. As of 5:30 PM, the deceased are nine in total. All are adult males. Thirty survivors were found in the trailer. Another survivor was found in the woods nearby.

At least nine people are dead after more than 30 people, including two teenagers, were discovered in a semi-trailer in San Antonio as part of an apparent human smuggling operation.

Listen
Listening...
/
Joey Palacios reports on the scene emergency workers found when they arrived at a San Antonio WalMart parking lot early Sunday to discover eight bodies in a truck and many others people suffering from heat stroke and dehydration.

All survivors were rush to hospitals showing signs of heat related illness and dehydration.

The semi-trailer was discovered in a WalMart parking lot at 8358 IH35 South. A store working called police after a person from the trailer approached him asking for water.

San Antonio Fire Chief Charles Hood said eight people were dead at the scene. At least two more died at hospitals. Many of the survivors are in critical condition. “Each one of them had heart rates over 130 beats per minute. They were very hot to the touch,” he said.

The exact number of people initially in the trailer is unclear. Some were picked up before police arrived.

It’s unknown where the semi was from or where it was heading.

The driver was arrested and faces state and federal charges. The investigation is now in the hands of Homeland Security.

The U.S. Attorney's office has identified the driver as  James Mathew Bradley, Jr. from Clearwater, Florida. He is 60 years old and is now is in federal custody.

Smuggling illegal immigrants through South Texas in the heat of the summer is deadly business. The high temperature Saturday was 100 with the heat index as high as 106. 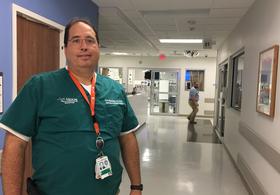 "A lot of these patients unfortunately become very quickly ill," said David Miramontes, MD. He is the Medical Director for the San Antonio Fire Department who helped triage suffering patients at the scene.

"So those people are trapped basically within an oven," he explained. "Their body systems aren’t able to handle that rise in heat that occurs in that closed environment.Treatment starts on scene. And the first thing is get them wet, get them cold, get them hydrated to get their kidneys restarted. A lot of the critically injured patients are intubated."

Six of the patients were taken to University Hospital, where Dr. Miramontes works, in critical condition.

This is not the first time in South Texas ill-fated smuggling operations have ended with multiple deaths.

In 2003, 19 illegal immigrants died trying to make it into the U-S from Mexico and Central America. They were stuffed in a trailer with more than a hundred people in it near Victoria, southeast of San Antonio. The driver was sentenced to 33 years in federal prison. In 2012,15 people died in a crash near Goliad in a truck packed with people desperate to cross the border. And just two years ago, 39 people were rescued from a hot trailer in Frio County, near death.

Mirmontes said EMS workers at the scene in San Antonio Sunday were hit hard by the magnitude of the preventable loss of life. "Our firefighters last night were really having a hard time taking care of this large amount of patients, especially since this was just a senseless tragedy," he added.

On Sunday, the head of Immigration and Customs Enforcement, Thomas Homan, described this latest incident in San Antonio as a horrific crime. He said smugglers show a reckless disregard for those they smuggle, people of all ages who risk their lives to come to America.