As Republican Leaders Meet In Dallas, Protesters Rally Outside

Some of the nation’s most powerful Republican politicians are in Dallas this week for the annual convention of the American Legislative Exchange Council – known as ALEC. There was action inside and protests outside.

The Dallas meeting is ALEC's 41st annual gathering, and exemplifies a kind of button-down conservatism. That’s reflected in its core values repeated a lot: free markets, limited government, and federalism – another way of saying state’s rights. 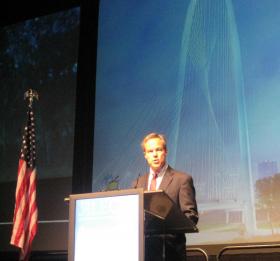 “So I applaud them,” Straus said, after his remarks to the crowd, “for staying more focused on free markets and federalism and maybe leaving some of those other things aside.”

Outside the Hilton Anatole, hundred of protesters gathered around a giant inflated cartoon banker. ALEC sees itself as deeply rooted in American values. However, former Texas  Agriculture Commissioner  Jim Hightower views the group as un-American.

“The corporate lobbyists bring drafted legislation,” Hightower explained, “that they hand to these legislators to go back and pass in their own state legislature. And so that’s where these laws come from. If you want to know where the sausage is made, there it is, right there, they’re always schmoozin’ and boozin’ together and stiffin’ the people.”

Without ALEC’s pro-business philosophy and employers though, Wendy Lowe, a lobbyist who attended the lunch, said folks like those marching outside might not have jobs that pay for food, shelter, or luxuries.

“There are a lot of small business men in this room,” Lowe said. “Jobs and the economy and making your  rent and paying the electric bill are really important to everyone. That’s what we care about.”

She and others at the ALEC meeting offer no apologies for what they say makes this country great.