Police are still looking for a suspect who ambushed and fatally shot a San Antonio Police officer Sunday.  it happened during a routine traffic stop near the police department’s downtown headquarters.

San Antonio Police Chief William McManus says it was just before noon when 50-year old Detective Benjamin Marconi stopped a vehicle for a traffic violation. Another car- a black Mitsubishi Galant- pulled in behind Marconi’s squad car.  Marconi was still behind the wheel when the suspect got out and moved towards him. 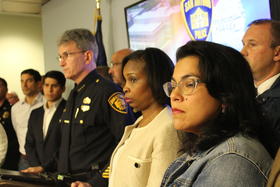 “When the suspect reached the driver’s side door, he fired a gunshot toward Detective Marconi striking him in the head. The suspect then reached in through the open window and fired a second shot which also struck the detective in the head,” McManus said.

Police video captured an image of the sedan speeding away. The suspect is described as a thin, dark skinned male in his 20s or 30s.

The chief says the murder has devastated SAPD officers. “Most families will be celebrating the holidays, SAPD will be burying one of its own because of an ultimate act of cowardice by a suspect who will be caught and brought to justice.”

San Antonio Mayor Ivy Taylor called the attack unacceptable, senseless violence. “As shocking and sobering as these tragic events are, I will say that I am thankful for the life and 20 years of service for Detective Marconi and for the thousands of SAPD officers who work to keep us safe.”