Austin economist Jon Hockenyos says bringing a medical school and teaching hospital to Austin could add about 15,000 permanent jobs to the community.

Hockenyos says nearly 7,000 of those jobs would be directly connected with the medical facility and research. The other 8,000 or so would be indirectly created.

“The impact of this facility and the operation of this entire complex is going to create ripple effects through the whole community and so we’ll raise the overall level of economic activity here and that will in turn create opportunities in restaurants and dry cleaners and for people supplying things to the medical complex – all those different, related, ancillary activities will then, in turn, have to hire workers,” Hockenyos says.Many of the jobs would require advanced degrees but most wouldn’t even require a bachelor’s degree – and that has Austin Community College President Richard Rhodes excited.

“More than half of those would require a certification or an associate degree – community college level. And that’s what we provide. And so it’s a great opportunity for high-skill, good living-wage jobs,” Rhodes says.

Hockenyos says the medical complex and business related to it will create about $2 billion annually in economic activity.

“This is probably one of the largest economic development initiatives that we’ll see in Central Texas probably in our lifetimes. And I think it’s particularly apropos for two reasons: one is that it’s an area where Austin has some real strengths that we really haven’t taken advantage of yet. And the second is it creates opportunity for a wide range of community citizens.”

This November, voters will get a chance to decide whether they’re willing to invest in a medical school and teaching hospital. Last week, the Central Health Board decided to ask voters whether they want to pay five cents more in property taxes per $100 of taxable value to help develop the facilities.

Laura Rice
Laura first joined the KUT team in April 2012. She now works for the statewide program Texas Standard as a reporter and producer. Laura came to KUT from the world of television news. She has worn many different hats as an anchor, reporter and producer at TV stations in Austin, Amarillo and Toledo, OH. Laura is a proud graduate of the University of Missouri-Columbia, a triathlete and enjoys travel, film and a good beer. She enjoys spending time with her husband and pets.
See stories by Laura Rice 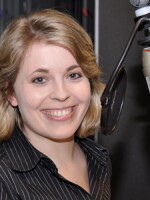 Bettina Meier
An original Berliner who grew up in East Berlin, Bettina Meier experienced the Fall of the Berlin Wall when she was nine years old. She grow up in East Berlin and after 1989 in the United Germany. She received a degree in business studies and Journalism at the University of Leipzig before heading to the U.S. for the first time.
See stories by Bettina Meier
Latest Stories
Related Content