During the Islamic month of Ramadan, Muslims around the world fast from dawn to dusk. Austin's Nueces Mosque in West Campus hosts free iftar dinners, a communal feast where Muslims break their day’s fast after sunset. The iftars are open to all members of the community, Muslim and non-Muslim alike.

Sabrina Khwaja, a University of Texas senior, said she frequents Nueces Mosque during Ramadan to engage with the local Muslim community. The location makes it easy for her to stop by. When she first heard about Nueces, Khwaja was relieved to find out she no longer had to break her fast alone.

“It’s tolling when you don’t really have someone to share that experience with,” Khwaja said. “The camaraderie at Nueces is great. You see a lot of familiar faces because a lot of students attend.”

Coming from a large Muslim community in Houston, UT senior Nermeen Khan was unsure where to turn when she moved to Austin. She said it was much easier to face the challenges of fasting with the support of the Nueces Mosque community.

“I discovered Nueces, I started coming here and it felt so much more like Ramadan,” Khan said.

Although many Muslims enjoy getting together to break their fasts at Nueces Mosque, many local restaurants also serve halal food, the Muslim equivalent of kosher. These include: 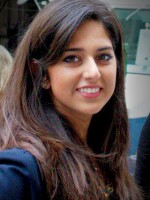 Minza Khan
Minza Khan, born in Kansas, raised in Texas is a KUT News intern who is currently majoring in Journalism and minoring in Textile and Apparel at the University of Texas at Austin.
See stories by Minza Khan
Syeda Hasan
Syeda Hasan is KUT's development and affordability reporter. She previously worked as a reporter at Houston Public Media covering county government, immigrant and refugee communities, homelessness and the Sandra Bland case. Her work has been heard nationally on public radio shows such as Morning Edition, All Things Considered and Marketplace.
See stories by Syeda Hasan
Latest Stories
Related Content