A state committee on Alzheimer’s disease that heard from former Texas football coach Darrell Royal and his wife has recommended the Legislature increase Alzheimer’s research funding, if possible.

It stressed that consistent funding can help make inroads in combating the disease and suggested tapping outside money to supplement what state government provides.

“There are significant opportunities for external funding sources,” concluded a report of the Joint Interim Committee to Study Alzheimer’s Disease. “These opportunities should be fully explored.”

Without suggesting a dollar amount, the report said state money for the Texas Alzheimer’s Research and Care Consortium should be increased “as the fiscal climate in the 83rd Legislative session allows.”

Amid deep budget cuts in the last legislative session, lawmakers allocated $5.23 million to the consortium for a two-year budget cycle, about 80 percent of its previous appropriation.

Some states budget more money for Alzheimer’s research. Leaders of the Texas consortium say Texas stands out because the group operates with a common goal and protocol at five different research sites.

“I have felt the pain and frustration that comes with watching someone you love slowly fade away,” Nelson told committee members at a hearing earlier this year, explaining that she was the primary caregiver for her mother as she battled Alzheimer’s before her death.

Alzheimer’s disease afflicts the brain and causes problems with memory, thinking and everyday functioning. Those suffering from Alzheimer’s can become completely dependent on caregivers. It’s most common in older people. About 340,000 Texans are living with Alzheimer’s disease, and more than 5,000 die from it each year. It’s expected that the number of Texans with Alzheimer’s will hit 470,000 by 2025 and double by 2050.

The committee’s report noted that the Texas Council on Alzheimer’s Disease and Related Disorders is an information resource for Texans with Alzheimer’s and their families. It also oversees appropriations for the research consortium.

The consortium needs ongoing funding to maintain and build on an Alzheimer’s disease data bank to track progression of the disease over the years and to advance the understanding of the disease’s cause, according to the report. It said more funding would allow additional institutions to join the consortium.

The consortium’s data bank includes some 2,000 volunteers from throughout the state and is available to all consortium researchers, who do ongoing analysis based on annual blood samples and interviews.

The state should also look to other funding sources, such as the National Institutes of Health, the National Alzheimer’s Project Act and private and non-profit foundations, the report said.

In seeking outside money, the lawmakers suggested promoting the “significant accomplishments” of the consortium, including the large representation of Hispanic research subjects in its Alzheimer’s data bank and its ongoing work to develop a blood test to predict the onset of Alzheimer’s. 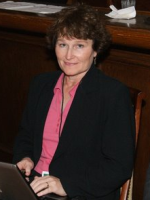 Kelley Shannon
Veteran Texas journalist Kelley Shannon is the founder and owner of kelleyshannon.com. Shannon has worked for multiple news organizations and spent 22 years with the Associated Press based in Austin, San Antonio and Dallas. Among the major news stories she covered for the AP were the Branch Davidian standoff in Waco and the ensuing federal trial of surviving sect members; the massacre at a Luby’s cafeteria in Killeen; the Democratic boycott over congressional redistricting in the 2003 Texas Legislature; and the presidential election of then-Gov. George W. Bush.
See stories by Kelley Shannon
Latest Stories
Related Content