Perry to Time: "I'll Be Better Every Day"

The Gov is on the cov.

Rick Perry comes out swinging in an exclusive interview in the new issue of Time magazine, which hits newsstands tomorrow. Perry sat down with the magazine's editor, Rick Stengel, and Mark Halperin, its editor at large and senior political analyst; he was photographed for the cover by Platon in a tight close-up.

Portions of the interview are now online, but we've culled a few choice excerpts:

On the Obama administration:

"I still believe they are socialist."

On the "provocative language" of his campaign thus far:

"There may be someone who is an established Republican who circulates in the cocktail circuit that would find some of my rhetoric to be inflammatory or what have you, but I’m really talking to the American citizen out there. I think American citizens are just tired of this political correctness and politicians who are tiptoeing around important issues."

On the prospect of a border fence:

"I do not agree that building a 1,800-mile barrier is thoughtful. It’s an easy answer. I think it’s a cop out for anyone who’s actually been on the border. It’s like building a wall from Bangor, Maine to Miami, Florida."

On how he's faring as a first-time national candidate:

"I suspect I’ll be better everyday." 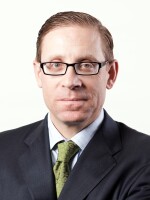 Evan Smith, Texas Tribune
Evan Smith is the CEO and editor-in-chief of The Texas Tribune, which, in its first year in operation, won two national Edward R. Murrow Awards from the Radio Television Digital News Association and a General Excellence Award from the Online News Association. Previously he spent nearly 18 years at Texas Monthly, stepping down in August 2009 as the magazine's president and editor-in-chief. He previously served as editor for more than eight years — only the third person to hold that title. On his watch, Texas Monthly was nominated for 16 National Magazine Awards, the magazine industry's equivalent of the Pulitzer Prize, and twice was awarded the National Magazine Award for General Excellence. For eight years, Smith hosted a Lone Star Emmy Award-winning weekly interview program, Texas Monthly Talks, that aired on PBS stations statewide. He currently hosts a new show, Overheard with Evan Smith, that airs on PBS stations nationally. A New York native, Smith has a bachelor's degree in public policy from Hamilton College in Clinton, N.Y., and a master's degree in journalism from the Medill School at Northwestern University.
See stories by Evan Smith, Texas Tribune
Latest Stories
Related Content