What Texas Can Learn From California About Gerrymandering, How To Draw District Lines

Critics call these convoluted district maps gerrymandering. They say the Republican legislature drew lines like this to dilute the power of Democrats.

Districts like Texas's 33rd — along with others in Pennsylvania, North Carolina, Wisconsin, and Maryland — have been challenged all the way to the Supreme Court. In 2017, federal judges ruled three of Texas' congressional districts were illegally drawn and violated the Voting Rights Act.

Jodie Filkins Webber is determined to change this practice -- and she's a Republican. She sits on California's independent redistricting commission, which voters there created almost a decade ago. She's crossing the country, arguing that the Golden State's solution to these oddly-shaped districts could work here. On a tour with Fair Maps Texas, she stopped by KERA for this week's Friday Conversation. 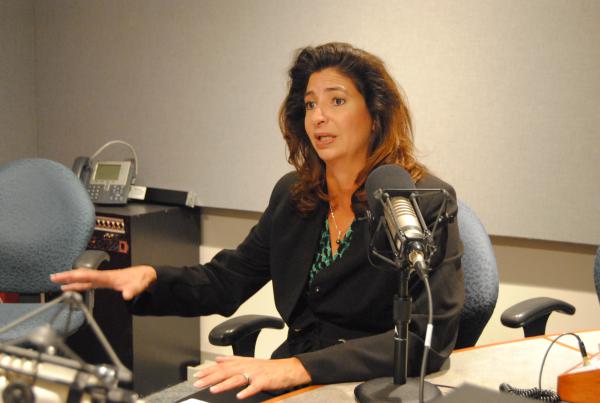 On how California reformed its redistricting process

"It's a very serious problem. Supreme Court Justice Elena Kagan spoke about partisan gerrymandering being equivalent to rigged elections. It's not fundamental to our democracy for politicians to be choosing their own voters.

"California, basically from 2000 to 2009, was in gridlock in Sacramento. Nobody could move anywhere. Businesses were suffering to perfect reforms like worker's compensation, and it was very difficult to have elected representatives actually pay attention.

"So, in 2008, there was a proposition placed on the ballot that created a commission that was charged with the responsibility of redrawing the voting district boundary lines."

On the makeup of the redistricting commission

"It was an elimination of conflicts of interest. You could not have been a candidate, a lobbyist, or served on a campaign. We are 14 individuals: five Democrats, five Republicans, and four undeclared members."

On a ProPublica investigation titled "How Democrats Fooled California's Redistricting Commission." [The reform was billed as nonpartisan, but today California has five fewer Republican members of  Congress than before.]

"It's not a question of fooling the commission, which was underlined in that ProPublica article. The reality is that we had two factors. We had a change in demographics and a change in party registration. That's going to pull even from the Democrat registered voters because we're now getting more undeclared voters."

"I'm not here to convince anyone of anything. We have a model in California that will give citizens some food for thought to determine that there is a different way that redistricting could be done.

"Are there really constituents in Texas that say they don't want transparency? That they dont want to partcipate in an open forum for redrawing lines? I think when people understand where they might have had some dilution in their vote, that's what inspires them to say, 'Wait a minute, can we really have a system that I can participate in?'"

Interview responses have been lightly edited for clarity.