Olive Oil Is Far From Being The Next Boom In Texas, But The Industry Is Growing

In the last five years the number of olive trees in Texas has increased rapidly, but even with tremendous growth several farmers say it’s not enough to call it the next oil boom.

Henry also co-owns the Texas Olive Ranch near Carrizo Springs and said he has had to face some hard lessons along the way. He now passes that knowledge along to people interested in getting into the growing industry. 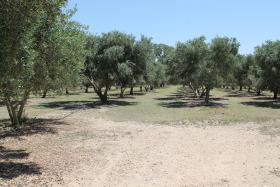 Henry said he has seen several retirees lose everything on olive farming because they weren't sure what they were getting into.

In Wimberley Jack Daugherty owns the Bella Vista Ranch and said he is skeptical that olive oil will ever become a singular sustainable agricultural product in Texas.

“I don’t think there is or are many places in Texas, if any, that we can put thousands of trees in the ground and get consistent output that would support the kind of infrastructure that an industry is necessary to have in order to be successful,” Daugherty said.

Daugherty identified temperature spikes that he said have killed hundreds of trees, temperature spikes that may not be very regular occurrences in places like California, Spain or Italy, where olives are also grown successfully. Daugherty said olive trees are alternate-bearing, meaning one year a farmer might get a large crop and the next two years very little.

“We’re in Texas and we have a series of problems -- mostly weather related -- that affect our trees when they're young and that delays the actual time of production," Daugherty said. "And it delays productions of a good quality crop on a consistent basis, it certainly affected us.” 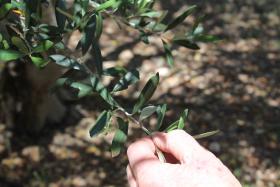 Daugherty pointed out some of the damaged trees from this winter.

“This year’s going to be a very light crop because we had a very bad winter, there are olives on the trees out there, we just went through a bloom cycle,” Daugherty said, pointing to the grayish nubs on the end of the tree’s blooms. They are tiny, about the size of a pin.

"You see some right there, these are getting to be a pretty big size," Daugherty said, lifting up the end of the plant's blooms. "You can tell that they’re olives, see that.”

The trees are generally harvested in the fall.

Daugherty said he has an estimated 1,200 olive trees and an equivalent sized vineyard, but neither of these, he said, compares to the money he makes from people wanting to visit and see firsthand a working farm that looks like the Tuscan countryside.

Daugherty said many of the bigger olive orchards use agri-tourism to supplement their income.

While there are some growing pains for the industry, Henry and the Texas Olive Oil Council believe the state could be close to making olive oil a well-established industry.

“What we really need in Texas are large commercial orchards with commercial farmers and we’re finding that that is starting to happen," Henry said. "Along the Gulf Coast we’re getting several 100-acre orchards and that makes it a meaningful industry. And we hope to expand on that with processing facilities, professional marketing, so it looks like we’re starting to get there after all these years.”

Nolan Ryan's Recipe for Success - and His Big Tex Rib-Eye

At the ripe old age of 10, Nolan Ryan announced to his parents he was ready to get into the cattle business. And he did just that – buying his first calf from a local dairy farmer outside of his hometown of Alvin, Texas.

Fast forward a few decades, and most folks seem to associate Ryan's name with baseball. Pitching in the majors for 27 seasons, Ryan played for the Mets and California Angels before coming home to Texas, pitching for the Rangers and Astros and being inducted into the Baseball Hall of Fame in 1999.

Customers lined up today for their last taste of tacos from Tamale House #3 on Airport Boulevard. Owner Robert "Bobby" Vasquez died last week, and the restaurant announced on Facebook it would close the location after 36 years. Tamale House East on East 6th St. will remain open.

"Everybody misses the place," said Connie Salazar, the long-time companion of Vasquez. "I'm going to miss him too."

Baton Creole food truck owner Lynzy Moran has been cited twice by the City of Austin for trying to be more environmentally friendly.

Once it was for collecting grease to be recycled into biodiesel. Another time it was for trying to compost food waste. Now she drives the hot oil she uses to clean her fryers from her East Sixth Street location to a commissary for disposal.

"I'm literally having to travel with hot oil in my car every night, which is also very dangerous and pretty scary," Moran says. "[I've] definitely burned myself a few times."

Listen
Listening...
/
1:43
Audio version of story that ran this morning