Of the more than 480 state historical markers in Travis County, only a handful commemorate Austin’s Mexican American heritage. That list is slowly growing now that the Texas Historical Commission has approved historical markers for four landmarks on the city’s East Side.

The effort was spearheaded by the nonprofit Preservation Austin and the Travis County Historical Commission. In order to get these sites recognized, two Preservation Austin interns, Katherine Enders and Catalina Cherñavvsky Sequeira, conducted extensive research into the sites and connected with longtime East Side residents who have endured the area’s rapid growth and change from gentrification.

"That's where history lives, within people and their memories and perceptions,” said Lindsey Derrington, Preservation Austin’s executive director. “These buildings are important for their history, but that history is only as important as the connection it makes to our community."

The markers are mostly symbolic and don’t come with designated protections from future development, but Derrington is hopeful this is a beginning step to preserving the properties and their cultural significance.

Rudy “Cisco” Cisneros, a restaurant owner and civic leader, was known as the “Mayor of East Austin.” He started his restaurant in 1950. It's best known for serving migas, huevos rancheros and homemade biscuits, but the brick building at the corner of East Sixth and Comal Street was also once a stomping ground for politicians and community organizers. President Lyndon B. Johnson would frequent the establishment, as did Texas governors Bill Clements and John Connally. Cisneros hosted countless fundraisers and events for the community before his passing in 1995. Cisco’s was sold to a group of Austinites in 2017, including Cisneros' grandson Matt Cisneros, and they’ve made an effort to preserve the restaurant’s authenticity, including its beloved menu.

For nearly eight decades, the Pan American Neighborhood Park has been providing services and activities for the East Side community, such as boxing, art lessons and cooking classes. It is also home to Austin’s longest-running outdoor concert series. Famed Tejano musicians, including a young Selena Quintanilla, have performed at the park's Hillside Theater. Murals depicting the history of the Mexican American community were added in 1978 by Raul Valdez, and the center continues serving the community today.

In 1970, Richard Moya became the first Mexican American citizen to be elected to public office in Austin and Travis County. Before his political career, which spans over 50 years, the craftsman-style home on East Cesar Chavez was Moya’s childhood home. He later inherited the property and transformed it into a political hub. It was often used as the headquarters for county, statewide and national campaigns and hosted countless fundraisers, phone banks and election nights from the 1970s to 1990s. The Moya House now serves as an event space.

At first glance, the teal-colored bungalow near the corner of East Third and Chicon streets may not stand out to passersby, but it was home to three trailblazing educators and activists in Austin: Consuelo Herrera Mendez, her sister Mary Grace Herrera and their niece Diana Herrera Castañeda. Consuelo, after whom Mendez Middle School is named, and Mary Grace were the first Mexican American teachers in the Austin Independent School District. They went on to teach for 45 and 35 years, respectively. They both fought to desegregate Austin schools and for more resources and opportunities for Mexican American students. Diana was an East Austin activist and the first Latina to be elected to the AISD board. The Herrera House was saved from demolition in 2019.

If you found this reporting valuable, please consider making a donation to support it. Your gift pays for everything you find on KUT.org. Thanks for donating today.
Tags
Austin Mexican American HistoryEast AustinTexas Historical MarkerKUT 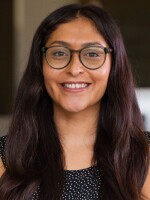